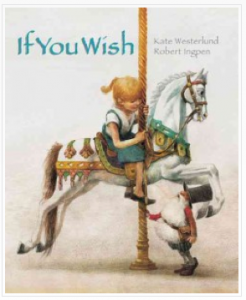 Publisher Summary  A strange man and a flying horse teach Willow that when she re-reads a book her imagination can show her brand new stories…This marvelous fantasy, illustrated by the internationally acclaimed Robert Ingpen, will have children re-reading their favorite stories and daring to travel inside the pictures as they discover that books are for more than just reading.

Thus begins a celebration of the power of imagination. This book unfolds as a dream might unfold for a child picturing a scene from a story and then imagining, “what if?” It leads to beautiful places, offers unusual perspectives of usual things, and challenges ordinary thinking to become extraordinary. Rich, dreamlike illustrations capture the glorious adventure this girl discovers by daring to think beyond the pages of her books. For every reader who needs inspiration. 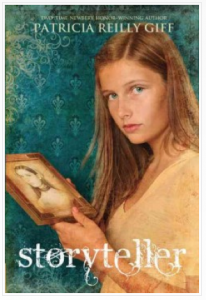 Publisher Summary  Elizabeth is drawn into a dramatic story from the American Revolution when she discovers a portrait of her ancestor, a girl called Zee, who has a striking resemblance to Elizabeth. The girls’ lives intertwine and Elizabeth’s present-day story alternates with Zee’s. As Elizabeth learns about Zee, and walks where Zee once walked and battles raged, the past becomes as vivid and real as the present.

Make Way for Books  Patricia Reilly Giff creates a gentle and beautiful story of finding one’s way and place in the world. Two stories, one set during the early days of the America Revolution and the other set in the present, interweave and leave the reader aware and appreciative of the gifts of individuality each person possesses. A well-crafted, affecting reading experience! 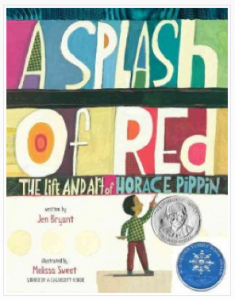 Splash of Red: The Life and Art of Horace Pippin

Publisher Summary  As a child in the late 1800s, Horace Pippin loved to draw: He loved the feel of the charcoal as it slid across the floor. He loved looking at something in the room and making it come alive again in front of him. He drew pictures for his sisters, his classmates, his co-workers. Even during World War I, Horace filled his notebooks with drawings from the trenches . . . until he was shot. Upon his return home, Horace couldn’t lift his right arm, and couldn’t make any art. Slowly, with lots of practice, he regained use of his arm, until once again, he was able to paint–and paint, and paint! Soon, people—including the famous painter N. C. Wyeth—started noticing Horace’s art, and before long, his paintings were displayed in galleries and museums across the country. Jen Bryant and Melissa Sweet team up once again to share this inspiring biography of a self-taught painter from humble beginnings who despite many obstacles, was ultimately able to do what he loved, and be recognized for who he was: an artist.

Make Way for Books  In an unusual move within book publishing, this author/illustrator team researched Horace Pippin together. The result is a remarkably tight text-illustration experience. While Bryant’s careful word choice flows easily, delighting and informing simultaneously, Sweet’s illustration conveys Pippin’s life story via his folk-art style, as if we readers are privy to his sketching pad. Sweet prominently hand-writes Pippin’s sayings, and illustrates close-up all that is important for Pippin to create his art, deepening the reader experience. This is an inspiring story of a talented individual who bore his responsibility to family and country well, and eventually, to his artistic gift. 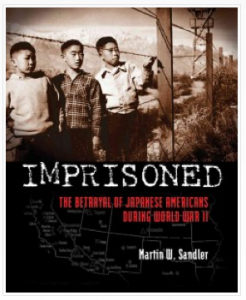 Imprisoned: The Betrayal of Japanese Americans During World War II

Publisher Summary  While Americans fought for freedom and democracy abroad, fear and suspicion towards Japanese Americans swept the country after Japan’s sneak attack on Pearl Harbor. Culling information from extensive, previously unpublished interviews and oral histories with Japanese American survivors of internment camps, Martin W. Sandler gives an in-depth account of their lives before, during their imprisonment, and after their release. Bringing readers inside life in the internment camps and explaining how a country that is built on the ideals of freedom for all could have such a dark mark on its history, this in-depth look at a troubling period of American history sheds light on the prejudices in today’s world and provides the historical context we need to prevent similar abuses of power.

Make Way for Books   Sandler presents a remarkable account of the events leading up to, during, and following the internment of Japanese Americans. Punctuated with photographs, the exemplary nonfiction writing provides much more than a history lesson; it delivers a moving and memorable reading experience. 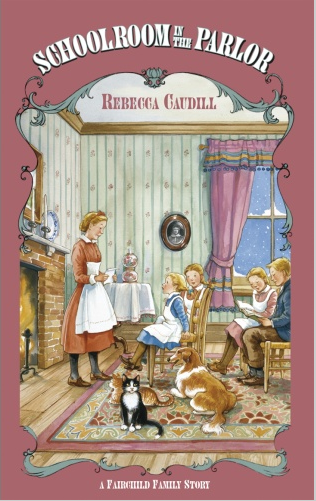 Huddled under voluminous blankets, watching the white pile up outside my windows, I reach for the old purple paperback that first gave me the word snowbound.

The book’s been sitting on a shelf next to the glider where I feed my four-month-old daughter six times a day. It’s there with the other children’s books whose covers can carry me back to parts of my life that I would otherwise never remember. This cover is a painting of a young girl standing in front of a glowing hearth, reading a book aloud to four other children. Their eyes are fixed on her.

I remember this image so well, I can almost feel the warm light on my skin, almost sense the snow outside their windows. Inside the cover, I find my name inscribed in careful, crooked second-grade cursive. I haven’t read Schoolroom in the Parlor by Rebecca Caudill for nearly twenty years. I don’t know what to expect when I open it again.

“‘I put all my books away the day Miss Cora’s school ended,’ said Chris. ‘That was the Friday before Christmas. I’m going to leave them there until school starts again. That won’t be till the first Monday in August’…”

I’m eight years old again, snug as a bug in a book.

The family is setting up the fire in the parlor they’ve turned into a schoolroom for the winter.

These words crackled with warmth long before I knew what they meant. I still don’t know what andirons are. 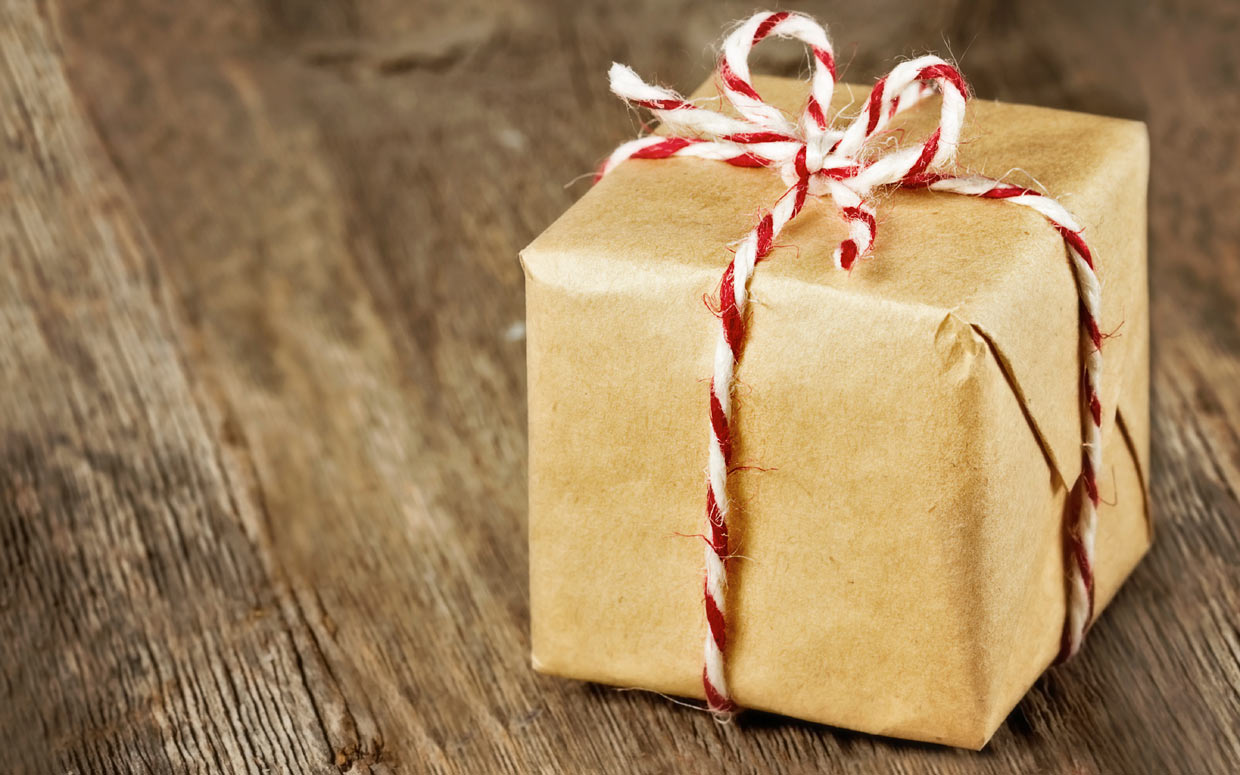 Father rides off on horseback to choose a prize for the children’s ‘Great Thoughts’ contest. The oldest daughter and teacher-for-the-winter Althy has taught a proverb or poem every day in January—who will remember the most, come the end of the month? The mysterious brown paper package from Father goes to the winner.

When the snow really sets in, the children all join in shoveling paths to the stable, the well, and the woodpile. The two youngest girls are handed long black breadpans to use as shovels. When I first read this book, I had no memory of snow, and no experience with breadpans. But I wanted to be there, knee-deep in the drifts, watching Father shovel faster than any of the rest of us, chipping in to weather winter as a family.

“Come outdoors with me a minute…”

When words like firmament and ethereal come up in the schoolroom, Mother takes her youngest daughter outside to show her the stars, the “spangled heavens.”

Author Rebecca Caudill never tells you how great this family is. But you feel it in everything they say and do.

The adventures the Fairchild children enjoy are real, exciting adventures. They’re given freedom and challenged with responsibilities (playing on their own in the orchard all day, rafting across the river to the store…), but there are limits. There are expectations and consequences. Their lives are warmly lit and safely enclosed, like the cozy schoolroom in the parlor. As a child, I barely noticed Mother and Father. Now I see that it’s Father and Mother who make it all safe, make it home, make it possible. 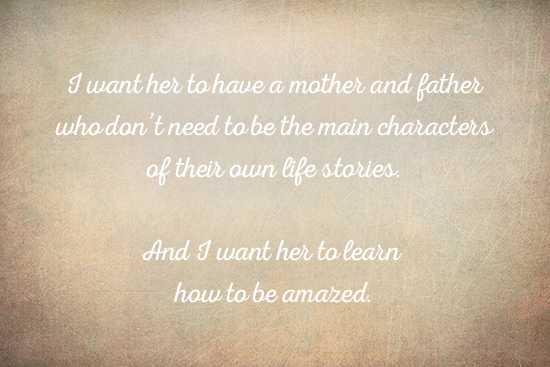 Caudill doesn’t paint this family as overachievers. The children aren’t angelic geniuses. Mother isn’t super-organized, equipped with charts, books, or blogs about homeschooling and cookery. Father doesn’t wax eloquent about efficiency, education, and hard work. These are regular people, regular parents who simply care about what their children learn.

And I want her to learn how to be amazed.

“Bonnie! Bonnie, wake up!” somebody was saying…

Father set the lamp on the table. He lifted Bonnie from underneath the covers, set her on the edge of the bed, and began to jerk on her shoes and stockings….

”Let’s go now,” he said, and he hurried down the stairs, lighting the way with the lamp….

Mother was already outside. Chris and Emmy and Althy were there.

“Look!” said Father to Debby and Bonnie. “Look at the sky.”

It’s a true classic that can capture the imagination of the same girl at nine and at twenty-nine. When I finish it, I set Schoolroom in the Parlor back in its rightful place on the shelf of treasures—just until my daughter’s hands are ready to turn the pages.

While Schoolroom in the Parlor is no longer readily available new, here are a few recommended titles that also express the wonder of learning and a supportive family influence.

Kate Roberts is a writer, editor, and new mom who has watched stories speak into children’s lives over nine years of working with children as a nanny, teacher, and special-needs caregiver. She lives in Philadelphia with her husband and daughter. They love to read Winnie the Pooh together.