Publisher Summary  What is courage? Certainly it takes courage for a firefighter to rescue someone trapped in a burning building, but there are many other kinds of courage too. Everyday kinds that normal, ordinary people exhibit all the time, like “being the first to make up after an argument,” or “going to bed without a nightlight.” Bernard Waber explores the many varied kinds of courage and celebrates the moments, big and small, that bring out the hero in each of us.

Make Way for Books  This thoughtful collection of courage-facets sparkles like new, even though it was published more than 10 years ago. In a most delightful, instructive way, the illustrations are of equal importance to the descriptive text that underlines them. Picture a roller coaster at its final descent (with a few green faces) and its caption: Courage is going on it again; and, a car full of riders followed by: Courage is a scenic car trip and being stuck in the middle during the best part. These enduring wisdom bytes show an expansive courage that includes self-control, responsibility, humility, confidence, trustworthiness, and more. 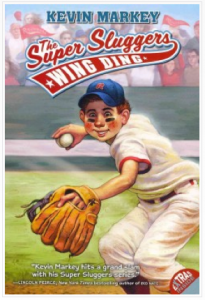 Publisher Summary  When the windiest weather in Rambletown history blows in a horde of hungry grasshoppers, the only thing the chomping insects devour faster than the grass is the Rounders’ chance to host the midseason all-star game. Unfortunately, their shortstop’s arm has gone haywire. Balls used to disappear into Stump’s glove as if he were a one-man Bermuda Triangle, but since the infestation, he’s jumpier than the grasshoppers. Will the Rounders find a way to rid Stump of the yips—and their home field of insects—before the hated Haymakers hijack the all-star game?

Make Way for Books  There is nothing ho-hum about this young-reader sports tale! Nicknames — Flicker Pringle, Walloper, Stump Plumwhiff, Pepper McGraw — personify each player, preparing readers for the delightfully descriptive story that follows:

“For one thing, rings the size of donuts encrusted her fingers..”; “…the deafening roar that greeted us…sounded more like some terrible orchestra made of up of chain saws, dirt bikes, and snowmobiles”; “The base runners were coiled like Olympic Sprinters waiting for the starting gun.”

Markey masterfully blends tall tale-style storytelling and a storyline replete with competitive camaraderie to show the true meaning of All-Star. Additionally, he weaves a somewhat complex science concept into the text and shows its meaning as a critical component of the story’s climax. And (perhaps a teacher’s dream) incorporates student news articles to show what well-crafted summaries look like. End material includes a graphic organizer of the story’s teams, along with wacky facts from baseball history. An undeniable home run! 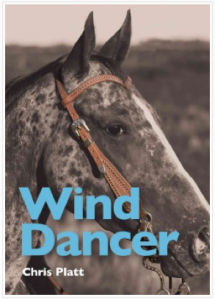 Publisher Summary  Having lost her beloved pony in a traumatic accident, thirteen-year-old Ali is reluctant to help her parents care for a neglected, malnourished Appaloosa, but working with Wind Dancer is a good distraction from problems surrounding her brother, who recently returned from Afghanistan with a missing leg and PTSD.

Make Way for Books  Courage abounds in this tale of putting others first, learning to accept change, and overcome adversity. Honesty, strength of family relationships, and a deep commitment to doing the right thing drive the characters to grow even when it is hard. The complex plot calls for difficult decision making and invites readers to think about what is right and why. A beautiful tale of love, courage, and valuable life lessons. Recommended for ages 9-11, grades 4-6, a little higher than publisher recommendation. 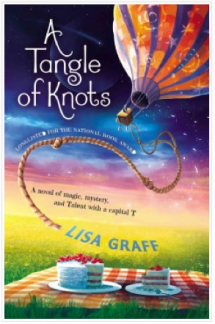 A Tangle of Knots

Publisher Summary  Told in multiple viewpoints, A Tangle of Knots is a magnificent puzzle. In a slightly magical world where everyone has a Talent, eleven-year-old Cady is an orphan with a phenomenal Talent for cake baking. But little does she know that fate has set her on a journey from the moment she was born. And her destiny leads her to a mysterious address that houses a lost luggage emporium, an old recipe, a family of children searching for their own Talents, and a Talent Thief who will alter her life forever. However, these encounters hold the key to Cady’s past and how she became an orphan. If she’s lucky, fate may reunite her with her long-lost parent.

Make Way for Books  A National Book Award Nominee for 2013, A Tangle of Knots is a beautiful story about Cady, an orphan who has a special talent for seeing people and knowing the perfect cake for them. Told from many different perspectives and with many different characters, it takes a little while for the “knot” to be tied, but with a touch of magic, a little mystery, a lot of warmth and humor, and even some great recipes, the author succeeds in weaving together a delightful story about relationships and how they are woven together.

“If you don’t know the trick, it’s a muddled predicament. But in fact each loop of every knot is carefully placed, one end twisting tight into the other in a way you might not have expected.”

This story will appeal to fans of fantasy, mystery, and stories about family. It may be a little too complex for struggling readers, but would make a perfect read-aloud. 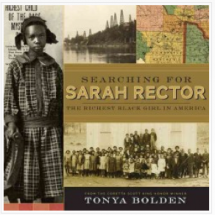 Searching for Sarah Rector: The Richest Black Girl in America

Publisher Summary  Sarah Rector was once famously hailed as the richest black girl in America. Set against the backdrop of American history, her tale encompasses the creation of Indian Territory, the making of Oklahoma, and the establishment of black towns and oil-rich boomtowns.

Rector acquired her fortune at the age of eleven. This is both her story and that of children just like her: one filled with ups and downs amid bizarre goings-on and crimes perpetrated by greedy and corrupt adults. From a trove of primary documents, including court and census records and interviews with family members, author Tonya Bolden painstakingly pieces together the events of Sarah’s life and the lives of those around her. The book includes a glossary, a bibliography, and an index.

Make Way for Books  Reading this book is like sitting under a studied historian who shares facts culled from myriad sources with care. The museum-like quality of the book’s page design and archived photographs lend authenticity to the telling of how a girl, born as a black member of the Muscogee tribe, whose history included forced relocation and the Trail of Tears, became wealthy. Bolden weaves an economics lesson into a colorful tapestry of Oklahoma expansion, land allotments, investments, lending, guardianships, greed, money, and race. The way events are explained and influential people are introduced gives readers time to digest important information. It is evident this was a painstaking work, as confirmed by a comment in the author’s note: “Better to rest on research and reason than on scuttlebutt.” This is as much about the lessons within the story as it is about how the author chose to craft it. A quality work.