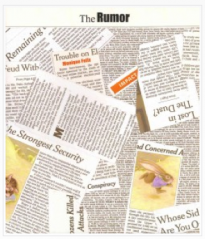 Publisher Summary  Word travels quickly through a peaceful village when a hungry beast is spotted in the hills. Some say he has ears that can hear a potential meal from a mile away! Others declare that his stink is enough to kill you with just one whiff! Still others report that his snout is stronger than a vacuum cleaner! The threat compels friends to warn one another and in humorous fashion turn hearsay into an increasingly inaccurate rumor. Uncertainty abounds, but by the time the villagers are safely gathered together out of harm’s reach, one thing is for sure readers young and old will be charmed by The Rumor!

Make Way for Books  When a well-intended, simple warning adopts dramatic changes with each retelling, even youngest readers can predict the dangerous, even ironic impact a rumor may have. A clever tale that uses humor and cause and effect to convey an important concept. 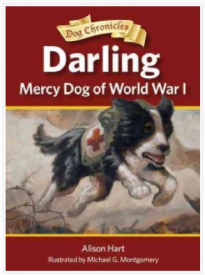 Publisher Summary  This action-packed and heartwarming story of a dog in World War I is the first book in the exciting new Dog Chronicles Series. At home in England, Darling is a mischievous but much-loved pet to Robert and Katherine. But when the British military asks families to volunteer their dogs to help the war effort, they send Darling off to be trained, even though it is very hard to say goodbye. Darling is ultimately used as a mercy dog, seeking out injured soldiers on the battlefield and leading the medics to them. After saving the lives of numerous soldiers, Darling is faced with a major challenge.

Make Way for Books  Uniquely told from a dog’s point of view, this book is both authentic and inspiring. While readers witness Darling’s transformation, from spoiled, carefree pet into self-sacrificing war hero, her journey provides a new perspective on World War I and allows readers to think about the kind of character necessary for thinking of others first in moments of life and death. Written with engaging characters and just the right amount of action, this story shows the change that love and loyalty can bring to one’s character. The story’s conclusion includes the history behind the story, along with an extensive bibliography of print and digital resources. (There are some very descriptive battle scenes, and while they are not inappropriate, the death depicted may warrant some discussion prior to reading.) 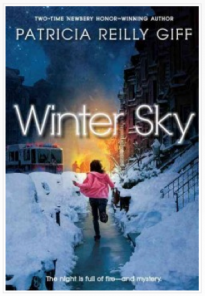 Publisher Summary  Sirens! A scary sound, especially to Siria, whose brave pop is a firefighter. Siria loves everyone at Pop’s city firehouse. She also loves to study the stars. Her mother named her after the brightest start in the winter sky.When Siria hears sirens, she sneaks out to chase the trucks, to bring Pop and the other firefighters luck. She’d be in big trouble if she ever got caught. Good thing her best friend, Douglas, is always by her side.As Christmas approaches, Siria suspects that someone in the neighborhood is setting fires. She has to find out who’s doing it. When clues point to a surprising suspect, she realizes that solving this mystery will take all kinds of courage. Patricia Reilly Giff, the author of many beloved and award-winning books, is at her best in this action-packed story.

Make Way for Books  “The rescue is everything,” explains Siria’s firefighting father. While watching her courageous father chase sirens through city nights, Siria worries she will lose him, her only parent. Enter a stray dog, suspicions about a close friend who may be an arsonist, and the caring love of several adults, and Siria soon learns despite danger, courage can lead to extraordinary outcomes. As Christmas and her New Year’s birthday approaches, Siria must bravely face her own mistakes and relax in the love that surrounds her. With her usual focus on developing memorable characters, Giff once again provides a story that is poignant and believable. 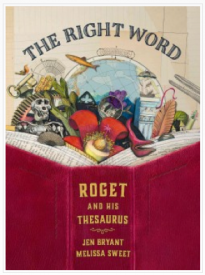 Publisher Summary  For shy young Peter Mark Roget, books were the best companions—and it wasnt long before Peter began writing his own book. But he didn’t write stories; he wrote lists. Peter took his love for words and turned it to organizing ideas and finding exactly the right word to express just what he thought. His lists grew and grew, eventually turning into one of the most important reference books of all time.

Readers of all ages will marvel at Roget’s life, depicted through lyrical text and brilliantly detailed illustrations. This elegant book celebrates the joy of learning and the power of words.

Make Way for Books  “The use of language…[functions] as an instrument of thought; not being merely its vehicle, but giving it wings for flight.” – Peter Mark Roget

Roget’s delight with language oozes from these pages. Illustrations, mostly hand-drawn give the sense Roget is telling his own story—how curiosity and wonder drove his search to capture a moment or thought or concept with just the right word. His vast experience as doctor, inventor, and author both entertains and inspires, showing readers the noble value of inquiry paired with humility. A masterful presentation and a must for lovers of language!